The ‘Nostrilhorse’ above, and the sculptures in the gallery below were on display during Willem Lenssinck’s solo exhibition at the Louwman Museum. A perfect match for this museum, that normally shows an amazing collection of classic cars.
The exhibition was titled “Horse Power” and showed sculptures depicting horses, and hybrids of horses and cars. Among the visitors were H.M. king Willem-Alexander and H.M. queen Màxima of The Netherlands.

“If I ask myself what it is that I value most in Willem Lenssinck, I discover various reasons for my innate sympathy.”

“In the first place, I see him as an authentic artist. He really had no other choice. The stimulus for his work did not come from his surroundings. On the contrary, he worked as an artist because that’s what he was on the inside, and he could simply not do otherwise. For me, that’s what true art is about.

I also highly value his craftsmanship. Nothing he does is ‘by chance’. Everything is carefully thought out and executed. He thoroughly immerses himself in the technical requirements of a work and respects them to the fullest.

Closely related to the above is his passion for perfection. This is obvious in all his sculptures. You only have to look at the patinas of the castings, or the pedestals. They’re always perfect.”

Guardian X on guard in Italy

Favourite themes in the work of Willem Lenssinck are horses, bulls, female and guard figures. ‘Guardian X’, created in 1995, got to have a ‘big brother’ a decade later. This Guardian stands nearly 3,5 meters tall, and one of them can be found on the estates of Silvio Berlusconi. 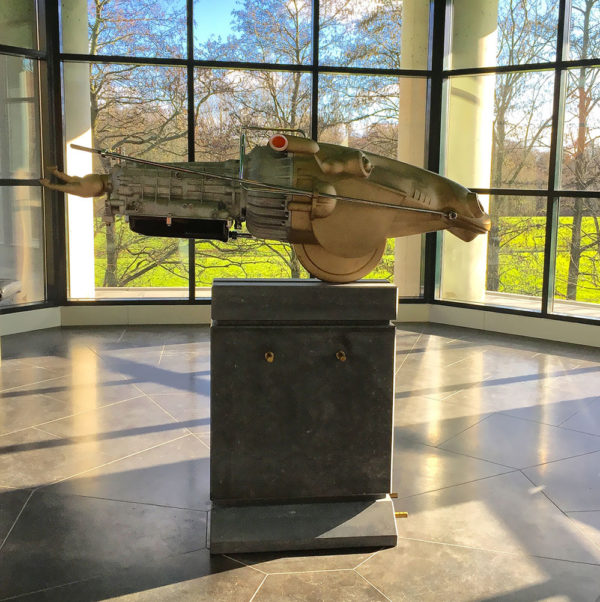 Lenssinck is not afraid of whatever material or technical challenge. Originally a ceramist, he switched to bronze, since ceramic structures were too feeble for the legs of the guard and horse sculptures he planned to create in the 1980’s. Besides clay, ceramics, he has worked with bronze, wood, glass, Neusilber (nickel-silver), pure silver, wrought iron, steel, aluminium.

The Atelier at Galerie Laimböck

Always working and creating, realising new ideas, Willem Lenssinck is an artist pur sang. When he suddenly catches inspiration, he moves to his atelier. Ignoring the fact how he is dressed at that moment, he has already ruined watches, new shoes and even set his pants on fire on several occasions. The work is often harsh, and involves working with heavy equipment, acids, and blow torches. 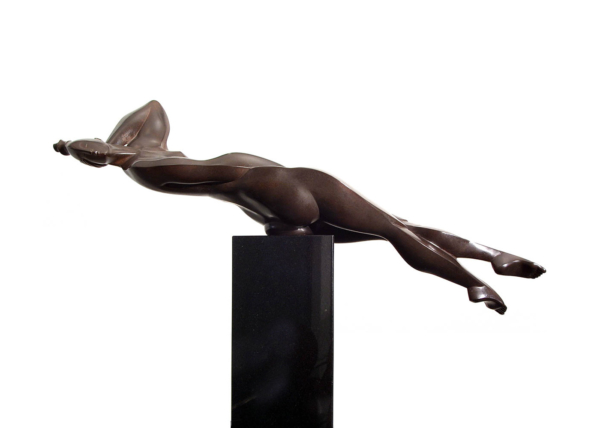 In the video below: Willem in Berlin at the Noack bronze foundry. Creating a nice patina on the Big Sunshine, as well as any other sculpture, is a ‘heavy duty’ task. The finishing and patina are important parts of the creative process and make every sculpture unique.

The Taurus Magnus (2005) – the last project where the enlargement of the original sculpture was done the traditional way; by measuring with 19th century tools and ‘the eye of the master’. Shortly after, Willem Lenssinck started experimenting with 3D techniques – up to 2010 still with very limited and pricy possibilities.

‘Will clay and plaster be consigned to the cellar and is that a bad thing? Not really. In 1900 the world witnessed the start of a new age of industrialisation. Similarly, at the beginning of the 21st century, we are witnessing the beginning of a new digital age. The art of sculpture has flourished for many centuries, and it will continue to flourish but with support from digital technologies.’ (Willem Lenssinck in his book ‘3D – The Art of Sculpting, 2018)

‘Although my father is very much interested in modern technology, I have never seen him doing anything on a computer or tablet himself. He does not type e-mails, nor does he make phone calls on the smartphone he does not possess. But I am pretty sure he was the first sculptor in the Netherlands to embrace CAD/CAM possibilities’ (Jero Lenssinck)

‘Some  of Lenssinck’s creations reveal to us the relevance of vital classic themes to our own times. Others create entirely ‘new’ images and realities for us. These are sometimes based on momentary glimpses of emotion or behaviour which are unmistakably contemporary in nature, or they can involve a surprising fusion between technology and tradition. But as it turns out, he is always exploring a path to an excitingly new but at the same time classical form of contemporary art.’ (Frans Jeursen)

Willem Lenssinck would never leave the finishing work of a sculpture to a foundry. He inspects each and every nook and cranny himself and does the final grinding, polishing and patination himself. Everything exudes quality. The bases too are of the highest quality and form part of the design.

‘As for myself, I work for my own pleasure. I can not and do not want to work any other way. Every sculptor who has ever struggled with a piece of shapeless clay, and who – after the transformation, after putting all his artistic passion and strength into it – has seen the result on a pedestal, in shiny bronze, knows that feeling of relief, satisfaction and joy. And ultimately that is the real reward for the artist.’ (Willem Lenssinck)